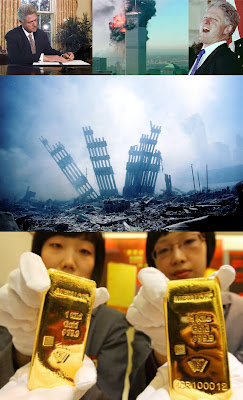 $10,000,000,000,000,000,000,000,000,000,000,000,000,000.
Amongst other projects, this money will be used to buy out all oil corporations, banks and pharmaceutical cartels. And it will zero out (permanently cancel) all personal, corporate and national debts worldwide. More about universal debt forgiveness and the imminent global debt jubilee can be found here. The Saint Germain World Trust resources are additional to, and separate from The World Global Settlement Funds.

The NESARA money was originally scheduled to be released in the year 2000, but the Bush White House and its banking and legal conspirators worldwide prevented the disbursement. And through corporate pan-global control of mainstream media outlets, nearly all knowledge of NESARA's existence was suppressed. This is now changing.

When the NESARA global prosperity programmes are openly and publicly announced, perhaps during September or October 2013, they will permanently change human civilisation in every money-related way.

The whole human population will benefit from NESARA. Earth is a most abundant planet. There is more than enough gold-backed human money currently in existence on Earth for each and every human being to be a GBP millionaire without debts of any kind. GBP = Great Britain Pound. NESARA is about sharing the resources of the planet around fairly. And NESARA is about putting benevolent banking systems in place worldwide to deliver this monetary fairness. No individual anywhere on Earth will be beyond the reach of the NESARA wealth redistribution programmes. And no individual or organisation anywhere on Earth will be able to stop it.

NESARA will cancel all credit card, mortgage and other bank debt due to illegal banking and government corruption worldwide. Income tax will be abolished. A new 14% flat rate tax on non-essential new items will provide the revenue stream for national governments. There will be increased benefits for senior citizens. In the USA, there will be a return to Constitutional Law at every level of the legal system.

President Barack Obama, Vice President Joe Biden and the constitutionally illegal cabal which pulls their strings will be removed from office with immediate effect, and long before the end of their present term. So will all members of Congress and their Khazar Zionist bosses. They will be replaced with constitutionally acceptable NESARA President and Vice President Designates, thought to be Congressman Dennis Kucinich (Democrat - Ohio) and Congressman Ron Paul (Republican - Texas). There will be new Presidential and Congressional elections within 120 days of NESARA's announcement. These elections will be carefully monitored to prevent vote theft and other illegal election activities by special interest groups.

A new USA Treasury rainbow currency will come into being, backed by gold, silver, and platinum precious metals. A new USA Treasury Bank System will be initiated in alignment with Constitutional Law. The Federal Reserve Board System will be abolished. Personal financial privacy will be restored. All judges and attorneys will be retrained in Constitutional Law. All aggressive USA government military actions worldwide will cease and global peace will be established. Every American citizen over the age of 21 will receive $100,000 a month for 11 years, but the Farmers' claims will be paid first. Here, the settlements will include debt forgiveness of $300,000 (including mortgages, credit cards and loans) for each farming family. Similar reforms will take place in every country in the world. Enormous sums of money will be made available for humanitarian purposes. New hitherto suppressed technologies such as free energy devices, pollution cleanup equipment and sonic healing machines will be released for the use of all.

Further background details and links about the NESARA global prosperity programmes and their history can be found further down this present blog page, and from James Rink here, from Patrick Bellringer here and from Mark Clarke here. In response to a critical interlocutor, Patrick Bellringer explains the legal history of the NESARA funding processes here (16/17.06.08). There is a useful compilation of NESARA links and material at Detailshere.com here. And a recent clone-related NESARA article can be found here.

Some information about USA White House corruption which intersects with America's blocking of the global NESARA reforms can be found on other pages of this blog here (Citibank scandal), here (Bush White House begins to disintegrate) and here (The crucifixion of Chief Justice John Glover Roberts).