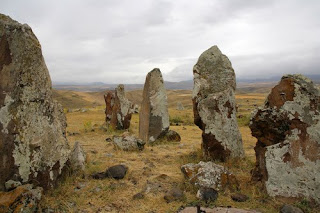 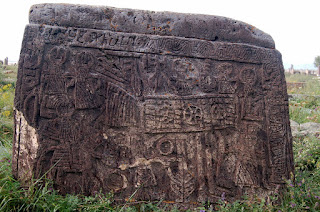 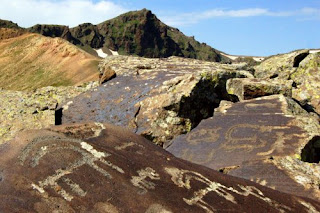 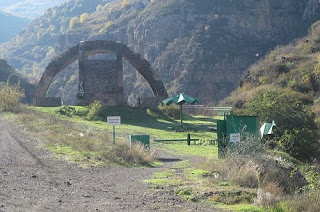 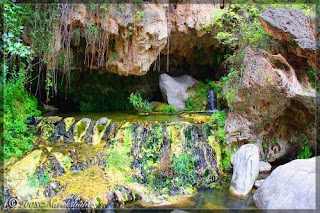 Heather Pringle
for National Geographic magazine
Published February 17, 2010
It wasn't supposed to happen like this.
Two years ago a team of U.S. and Greek archaeologists were combing a gorge on the island of Crete (map) in Greece, hoping to find tiny stone tools employed by seafaring people who had plied nearby waters some 11,000 years ago.

Instead, in the midst of the search, Providence College archaeologist Thomas Strasser and his team came across a whopping surprise—a sturdy 5-inch-long (13-centimeter-long) hand ax.
Knapped from a cobble of local quartz stone, the rough-looking tool resembled hand axes discovered in Africa and mainland Europe and used by human ancestors until about 175,000 years ago. This stone tool technology, which could have been useful for smashing bones and cutting flesh, had been relatively static for over a million years.
Crete has been surrounded by vast stretches of sea for some five million years. The discovery of the hand ax suggests that people besides technologically modern humans—possibly Homo heidelbergensis—island-hopped across the Mediterranean tens of thousands of millennia earlier than expected.
Many researchers have hypothesized that the early humans of this time period were not capable of devising boats or navigating across open water. But the new discoveries hint that these human ancestors were capable of much more sophisticated behavior than their relatively simple stone tools would suggest.
"I was flabbergasted," said Boston University archaeologist and stone-tool expert Curtis Runnels. "The idea of finding tools from this very early time period on Crete was about as believable as finding an iPod in King Tut's tomb."
(Related: "Homo Erectus Invented 'Modern' Living?")


Even so, as researchers from the Directorate of Paleoanthropology and Speleology of South Greece and four U.S. universities combed the island, evidence of this unlikely journey kept mounting.
The team found more than 30 hand axes, as well as other stone tools of similar vintage, embedded into geological deposits at nine different locations on the southwestern coast of Crete near the town of Plakias. Some artifacts had possibly eroded out from caves in the sea cliffs, becoming incorporated into ancient beach deposits. Over time, geological processes lifted these ancient beaches up and away from the shore, forming natural terraces.
The team’s geologists dated the youngest of the terraces associated with the hand axes to at least 45,000 years ago using radiocarbon dating, and they estimated the oldest terrace with stone tools to be at least 130,000 years ago.
(Related: "How Ancient Voyagers Settled the Far-flung Islands of the Pacific.")

Early Humans "Not Lost at Sea"?
The dating of the sites has convinced project leader Strasser that early humans were voyaging across the Mediterranean tens of millennia earlier than believed.
"These early people were intentional seafarers," he emphasized, "not individuals lost at sea."
How long was their sea journey? It depends when they traveled and where they came from.
Maps of the coastal shelves suggest that even when the Mediterranean reached its lowest known point, plummeting some 440 feet (144 meters) below current sea level, people leaving from Turkey or Greece would have had to make three separate water crossings ranging from 12 to 24 miles (19 to 39 kilometers) each to reach Crete. If, on the other hand, the seafarers departed from Africa, they would have voyaged over 125 miles (200 kilometers) of open water.
"The fact that we have several hundred stone tools in nine different locations suggests that a large enough number of people came in order to sustain the populations and leave a visible archaeological trace," Runnels said. "That means they didn't just raft over once."
Stirring Debate
The new finds, which will be published in June in Hesperia: The Journal of the American School of Classical Studies at Athens, could rock many archaeological boats.
Researchers have long theorized, for example, that ancient human migrants from Africa—such as Homo erectus and Homo heidelbergensis—departed the continent on foot, trekking eastward through the Sinai Peninsula and then across the Middle East. (See "Massive Genetic Study Supports 'Out of Africa' Theory.")

But the finds on Crete open an entirely new possibility. Although archaeologists had found hints of early humans on Crete, these new discoveries, says Strasser, "are the first geologically datable finds. It seems likely that future research will support this initial discovery."
Moreover, the discovery could spark a host of other scientific debates.
If ancient humans were crossing the Mediterranean, Runnels said, then they certainly could have crossed other water barriers, such as the Red Sea or the Gulf of Aden. "And that means that the assumptions that we have had—that the peopling of Eurasia was done by early hominins moving overland through the Near East, into India and down—will have to be revisited." Hominins, or hominids, are members of humankind's ancestral lineage.
Not surprisingly, the new research in Crete is already stirring debate.
Geoff Bailey, an archaeologist at York University in England and an expert on ancient coastal migrations, calls the idea of such ancient sea crossings "plausible." But he thinks the team needs to find and conduct excavations at sites where ancient humans were actually making and using the stone tools.
"At the moment" Bailey said, "the dating is very vague."
Katerina Harvati, a paleoanthropologist who has worked extensively in Greece, accepts the team's identification of the quartz artifacts as hand axes, but she wants to see other lines of evidence for the dates.
"The team has made a very good start," said Harvati, of the University of Tübingen. "But I think there needs to be a lot more work on dating the sites to really securely place the artifacts into a chronological context."
More Evidence of Ancient Seafaring
At present, the earliest widely accepted evidence of ancient seafaring comes from Australia.
To reach the southern continent from the Southeast Asian mainland some 50,000 years ago, modern humans had to cross a 600-mile-long (970-kilometer-long) band of islands and at least ten ocean straits. The largest of these straits spanned 44 miles (71 kilometers) of open water—a gap that no large-bodied animal had ever managed to cross before Homo sapiens. To undertake such a lengthy crossing, human seafarers likely lashed together bamboo to make a simple watercraft.
(Related: "Early Polynesians Sailed Thousands of Miles for Trade.")
Other pieces of evidence, however, suggest that seafaring could go back much deeper in time.
The discovery of human remains and stone tools in Spain dating to over a million years ago may indicate that some ancient hominin navigated the hazardous Straits of Gibraltar from Morocco, a journey of less than 12 miles (19 kilometers).
Moreover, Michael Morwood, an archaeologist at the University of New England in Armidale, Australia, has long proposed that Homo erectus voyaged from the Indonesian island of Bali to nearby Flores, where excavations have revealed 700,000- to 800,000-year-old stone tools.
If additional work confirms that the earliest stone tools on Crete date to more than 130,000 years ago, archaeologists may want to take a closer look at these hypotheses.
One solid bet is that archaeologists will be giving more thought in years to come to the question of why early humans chose to venture out on the sea in the first place.
In the case of Crete, said Strasser's team member Eleni Panagopoulou, an archaeologist at the Directorate of Paleoanthropology and Speleology of South Greece, seafarers may have craved new territory or new marine resources such as shellfish beds.
At the heart of it all, though, Panagopoulou suspects, was something fundamental to all human beings: "I think they were mainly motivated by curiosity," she said, "and the desire for exploration."
Πηγή...