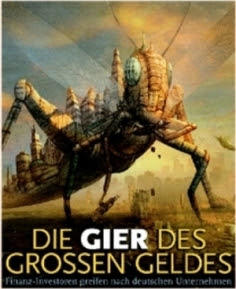 Basil Venitis points out that we are living the last days of the American Empire. Like ancient Rome, America is saddled with an empire that is fatally undermining its government. The trappings of empire are many: the brutal war of choice in Iraq and other foreign interventions going back decades; the militarization of space; the hundreds of overseas U.S. military bases full of swaggering soldiers who brawl and sometimes rape.

At home, the growth of an imperial presidency, with the CIA as its private army, has culminated in kleptocrats' resort to warrantless wiretaps, torture, a gulag of secret CIA prisons and an unconstitutional arrogation of dictatorial powers, while a corrupt Congress bows like the Roman Senate to Caesar. Retribution looms, as the American economy, dependent on a bloated military-industrial-kleptocrat complex(MIKC) and foreign borrowing, staggers toward bankruptcy, maybe a military coup.

Obama said America would finally, quickly and safely withdraw from Iraq, and even pay for domestic needs with the savings. But it became clear by his February speech at Camp Lejeune that his approach would be more or less what we would have expected from a third Bush term -- following the approximate benchmarks of the Status of Forces Agreement that Bush himself had acceded to in late 2008. Meanwhile, Obama gave no mention of the Vatican-sized embassy, its force protection, military contractors, troops charged with training the Iraqi military or what non-combat troops was really supposed to mean. All of this means the U.S. could indeed remain there longer than Bush had promised, and could lead to another escalation in that theater of war. Over a hundred thousand U.S. troops remain in Iraq. One hundred forty five have died there since Obama took office.

Venitist Anthony Gregory points out that in Afghanistan, the situation has been far worse than we could have probably expected under another year of Bush. This is all because, tragically, Obama has kept his promise: He announced in November the deployment of about 30,000 additional troops, bringing the total number up to about three times what it was when he took office. 2009 became the worst year for the Afghan people since 2001 -- more depredations of children's rights and the most civilian deaths since the invasion, including in air strikes that are ripe with scandal and can only contribute to the terrorist threat. As commander of U.S. forces in Afghanistan, Obama picked General Stanley McChrystal, who became the target of controversy in the Bush years for the draconian handling of detention centers, the blocking of Red Cross from these prison camps, and for his involvement in covering up the truth about Pat Tillman's death. Needless to say, when McChrystal publicly contradicted the president's assessment of what was needed for victory, he was not fired for insubordination. Obama and the Democrats always criticized Bush and the Republicans for "neglecting" Afghanistan. The Democrats' due diligence has successfully made Afghanistan a far deadlier place than Iraq in the last year. About 300 have died there since Obama took office.

Anthony Gregory notes this is all, supposedly, to take down about 100 members of al-Qaeda who live in Afghanistan and to stop a somewhat larger number in Pakistan from destabilizing that country. To stop the enemy in Pakistan, Obama has dramatically escalated drone strikes, launching them more than 40 times, killing far more civilians than militants and displacing as many as two million Pakistanis from the Swat valley in one of the largest refugee crises since Rwanda. Obama assures us we need not actually invade and occupy Pakistan, since it is a U.S. ally, but this policy of pseudostability supposedly justifies the entire U.S. project in both nations.

Anthony Gregory points out the military excursions -- which the Democrats used to condemn as "unilateralism" when Bush did it -- mount from nation to nation. In his November speech at West Point announcing the escalation in Afghanistan, Obama promised more intervention in Somalia and Yemen. He had already bombed and even with a small force invaded Somalia, and provided about eighty tons of weaponry to Somalia's government, much of which ends up in the hands of the insurgents. His administration had threatened to invade Eritria in April. In the next month, at least dozens of civilians were killed in Yemen by Obama's cruise missiles, which was soon after cited by the Christmas Day underwear bomber as the inspiration for his attempted act of blowback.

Although his diplomatic tone toward Iran marks an improvement over Bush's belligerence, it is also less coherent, coming from an administration that claims Iran was "caught" with a nuclear facility that Iran itself had announced, well within its rights, to the International Atomic Energy Agency and that was not nuclearized at the time of this supposed revelation. Obama has approved tough sanctions on Iran, a classical act of war by other means, which will only hurt the Iranian people and strengthen the mullahs. While the claims that Iran is intervening in the battlefields of Iraq and Afghanistan against our forces strain credibility, in October, a terrorist associated with Jundallah -- an al-Qaeda-affiliated enemy of the Iranian government that the United States most likely backs covertly -- carried out a suicide attack that killed 31 people.

Obama has also backed stricter sanctions against North Korea, a billion-plus dollars in foreign aid to Mexico so it can crack down on drugs, and $108 billion in loan guarantees to the International Monetary Fund.

This budget looks ahead ten years and accounts for spending that was left out under the old rules -- and for the first time, that includes the full cost of fighting in Iraq and Afghanistan. For seven years, we have been a nation at war. No longer will we hide its price.

Anthony Gregory muses the president who won the Nobel Peace Prize has pushed through the largest "defense" budgets since World War II, and just requested a total of $708 billion Department of Defense budget for next year. Nevertheless, Obama condones Turcoterrorists. Motherfucker Turcoterrorists wreak havoc in Fourth Reich(EU), especially Cyprus and many islands of Aegean Sea, the Greek archipelago. Moreover, Turkey has declared casus belli against Fourth Reich. Nevertheless, terrorist Turkey has the nerve to apply for Fourth Reich membership! If this is not a joke, what is it? Basil Venitis asserts that Fourth Reich should embargo terrorist Turkey. If NATO wants to save its inegrity, it should expel terrorist Turkey right now, and throw the terrorist Turkish troops out of North Cyprus now. Allah il Allah!

In some important ways, Obama's general promise to change foreign policy was always in tension with his specific campaign vows. To the extent it has changed, it has almost all changed for the worse -- more intervention, more war, more foreign aid, more bombings. But the trajectory is approximately identical to the way it was under Bush. What else would we expect from the president who put McChrystal in charge of Afghanistan, appointed John Brennan, another Bush adviser closely associated with Bush's "enhanced interrogation" policy, to the post of Deputy National Security Adviser for Homeland Security, and kept Robert Gates as the Defense Secretary upon taking office on a campaign of hope and change?

Obama and Hellenic America: A Year in review.

(Please distribute the link below to “Obama and Hellenic America: A Year in review”)

* Ioannis Fidanakis is a Grad Student and Hellenic-American Activist. He was the youngest elected President of Panthracian Union of America “Orpheus” serving as President from November 2007 till November 2009. As President of Panthracian Union he was responsible for organizing the first ever Hellenic Genocide Commemoration outside the United Nations on April 6, 2009. He is currently the Panthracian Representative to the Federation of Hellenic Societies of Greater New York, where he is also a Board Member. A member of the Hellenic League of America, HLA and Cyprus Action Network of America, CANA he has been featured as a guest speaker at several different grassroots rallies, lectures, and functions up and down the American East Coast. His writings have been published several times in Hellenic-American newspapers from Chicago to New York, as well as on Global Politician.com. His various articles have been republished on numerous blogs and web sites such as Sparta: Journal of Ancient Spartan and Greek History. Ioannis has a B.A. in Political Science; with a concentration in International Politics and a minor in History. He is currently pursuing his Masters in Public Policy.